Skateboarding has its own idiosyncratic lexicon that developed during its origins as a fringe sport. While some terms have become common parlance – like “halfpipe” or “ollie” – others are more obscure.

To help decode skater the lingo, below are the names of some of the common features found in skateboard parks along with photos – where available.

A full pipe is pretty much what it sounds like, a complete tube that can be skated. The earlier versions of these were storm drains, but eventually, they made their way into skateparks.

Once you know what a full pipe is, a halfpipe is pretty self-explanatory. A halfpipe is the bottom half of a full pipe, typically with a flat bottom that creates some space between the transitions (and some time to think about your next trick).

Half pipes that are large enough (typically in the 10 – 12 foot range) that the top of the transition curve reaches vertical for some distance are referred to as vert ramps. Smaller ramps that don’t reach vertical are called mini ramps and are typically much smaller (often in the 4-6 foot range).

The math here is pretty simple: a quarter pipe is half of a halfpipe. That means it only has one transition. Quarterpipes can also be mini ramps or vert ramps. In-ground concretes skateparks will often have long quarterpipes that serve as the outer edge of the park

A capsule is a half-circular over-vert section of a bowl. Often, capsules look like a sphere cut in half and turned on its side. Some capsules, like the one in the photo above, are just barely over vert.

When you put two quarterpipes back to back they form a spine. These can connect different sections of bowls or halfpipes, or be stand-alone features.

The first skateable bowls were backyard pools. Whereas a halfpipe is open at both ends, a bowl is fully or mostly enclosed, offering carvable corners. Bowls are often described based on their shape. An oval bowl is called an “egg,” for instance, an oval bowl that bends in the middle a “peanut”, and a clover-shaped bowl is called a cloverleaf.

An extension is any portion of a ramp or bank where the top of the ramp is taller for a certain length.

A bank is a skateable surface that angles up or down from the flat ground. As skatepark features, banks are often paired with other features and put together to form pyramids, A-frames and other more complex features.

A hip is a bend in a curved or flat transition so that the two faces turn away from each other. This creates a ridge in the middle, which allows skaters to air or grind over.

A flat rail is a long rail on flat ground that skaters can rail slide and grind.

Stairs are pretty much what they sound like. Skaters may ollie the steps or ride the handrails, hubbas, or ledges associated with them (see below). The size of a set of stairs is often given based on the number of steps. So a “six” is a set of stairs with six steps.

Modern skateparks often have banks next to stairs so skaters can navigate the drop without having to ollie the stairs or slide a hand rail.

A handrail is a railing down a set of stairs or a bank. Handrails are a common street skating element that started in the built environment and are now emulated in skateparks.

Hubbas are tall narrow ledges that angle down a set of steps or a bank. In skateparks, they are often made of concrete and edged with metal, though not always.

A ledge is one of the simplest features, an elevated box with a long edge that can be skated. Ledges can be high or low, short or tall, and are often mixed in with other features.

Also called a “manny box,” these are typically flat, elevated platforms that skaters can wheely across (aka “manual.” Manual boxes are often combined with other features to form more complex structures for skating.

An A-frame is essentially two flat ramps placed back to back to form a wedge. They are often combined with rails, ledges, and hubbas. 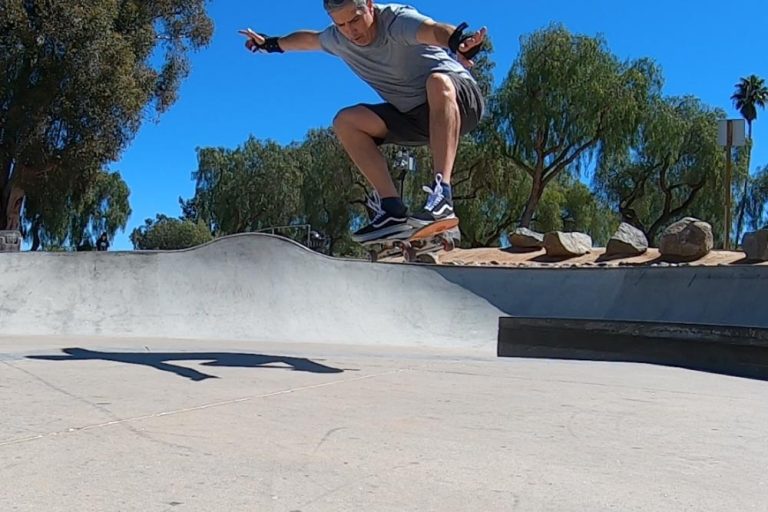 Inspired by Tony Hawk, I’m on a mission to learn back 50 skateboarding tricks by my 50th birthday