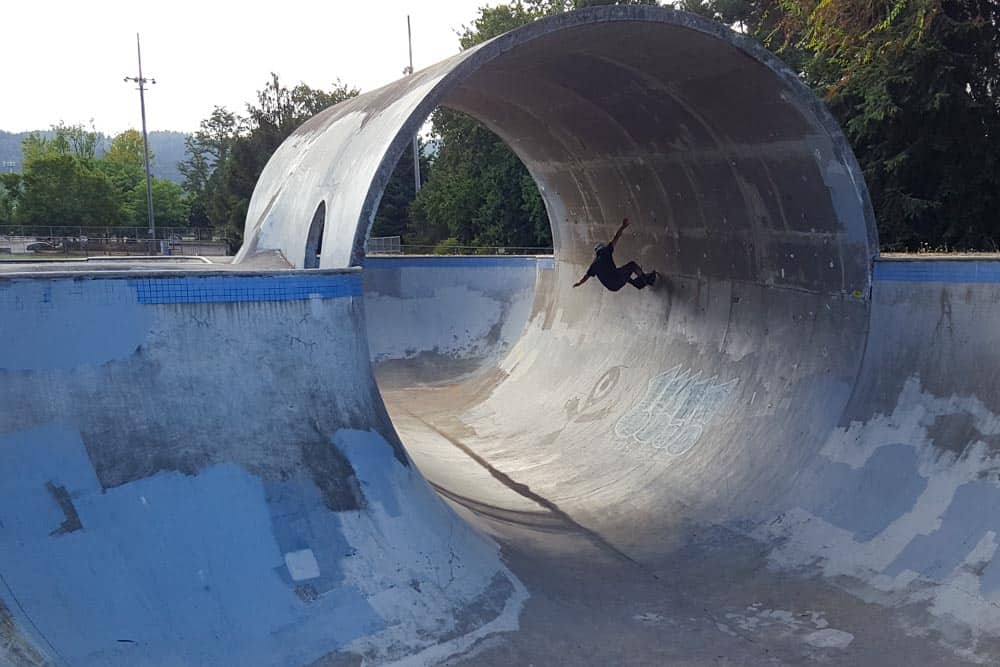 There’s something about a full pipe that attracts skaters like moths to a flame. Whether it was in-the-wild full pipes like the legendary Mt. Baldy or park tunnels like the one at the famed Pipeline skatepark, full pipes have held a special place in skaters’ imaginations since the beginning.

In recent years, with the acceptance of skateboarding as a legitimate endeavor (we didn’t need it, but we’ll take it) and the proliferation of concrete skateparks, full pipes have reemerged. Below is an incomplete list of skateparks with full pipes. We’ll keep adding to it as we find more. If you know of one that isn’t on the list, drop us a note through our contact form.

Built in 2003, Carbondale Skatepark in Carbondale, Colorado, was an impressive contribution to the concrete skatepark scene. The 17,300-foot park includes a capsule-style full pipe that’s 18 feet in diameter.

To see the Lake Cunningham Actions Sports Park in San Jose California is to believe that Santa Claus is real – at least for skateboarders. This 68,000 square-foot skatepark has just about anything a skater could want, including a full pipe with a curved top shoulder making it resemble a barreling wave. There are also two over vert capsules.

Linda Vista Skatepark in San Diego has a full pipe with portions of the tube cut out so that skaters can hit the lip in places. There’s also a window cut out of part of the pipe that people carve and air over – or toy with the lip at the bottom of the window. So rad.

Officially known as the David Armstrong Extreme Park, the Louisville skatepark is Kentucky’s contribution to the world of concrete transitions and steel coping. The park boasts a foot full pipe between a circular bowl and an elongated pill-shaped bowl with a mini bowl offshoot.

Pier Skatepark in Portland, Oregon, has a massive full pipe that connects two large vert bowls, an oval bowl, and a large square bowl. There is a window inside the pipe that adds to the fun.

Newark Skatepark in Newark, Ohio, which was designed by Spohn Ranch, opened in 2020 claiming the best skatepark in Ohio. With a full pipe like this, who’s going to disagree?

North Houston Skatepark, also known as Spring Skatepark, is one of the largest parks in the United States, and the full pipe is size to match. What is it they say about everything being big in Texas? The pipe is 20 feet in diameter and anchors a massive bowl complex.