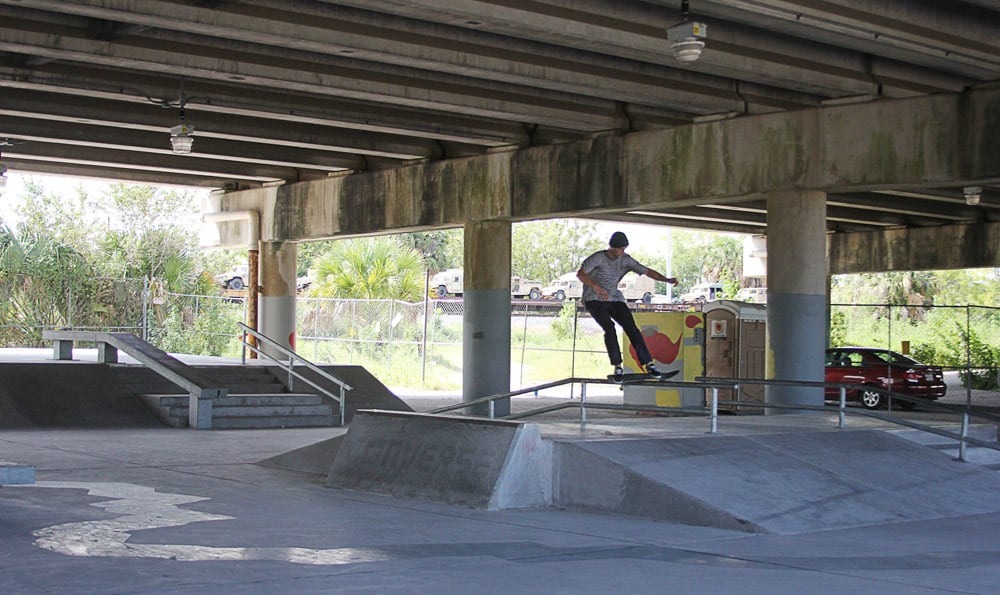 Parisite Skatepark is a 6,000-square-foot outdoor concrete skatepark in New Orleans, Louisiana that first opened in 2014. The park has an interesting history that has been shaped by the local skateboard community acting in defiance of the City of New Orleans at times.

For a long time, New Orleans had been the largest US city without a skatepark. The local population had been fighting with the city for a public skatepark for decades, and in frustration, Parasite DIY started to build wood/metal ramps and install DIY rails and concrete structures without permits or city permission on the current site beneath the Interstate 610 overpass.

Today, the park is 100 percent legal and has been significantly upgraded with large help from the Spohn Ranch design and construction team, Red Bull, the City of New Orleans, and a successful Kickstarter campaign.

The Parisite Skatepark in New Orleans is a work in progress that is seeing the 4th phase of construction at the moment which will add a large peanut-shaped bow to the park.

At the moment, the Parisite Skatepark has a long and large bowl-like area that has some characteristics of a snake run and a much-loved funbox between two sets of quarter pipes. There are also plenty of stairs, rails, kickers, and gaps to give street skaters plenty of terrains to choose from to put together runs.

For example, one of the crowd favorites of local skaters is a gap between two kickers that also has a handrail that stretches the entire distance of the obstacle. Drop in on one of the quarter pipes, build up some speed, hit the kicker, clear the gap and grind the handrail down the other side.

Many of the current elements of the Parisite Skatepark were donated by Red Bull after the Red Bull Mississippi Grind event came to an end.

The Red Bull Mississippi Grind event was a collaboration between Red Bull and Spohn Ranch that saw a 3,500 square-foot concrete skatepark designed and constructed on top of a river barge that traveled down the Mississippi River starting in St. Paul, Minnesota, and ending in New Orleans, Louisiana.

Once the barge reached New Orleans and the event was over, the skatepark elements were placed in storage until a site was declared where the new skatepark was to be constructed.

After a few years of politics and red tape getting the project approved by the city, Spohn Ranch, Parisite DIY, the Louisiana Department of Transportation, and the City of New Orleans finally came to an agreement to legitimize the illegal skatepark located on Pleasure Street beneath the Interstate 610 overpass.